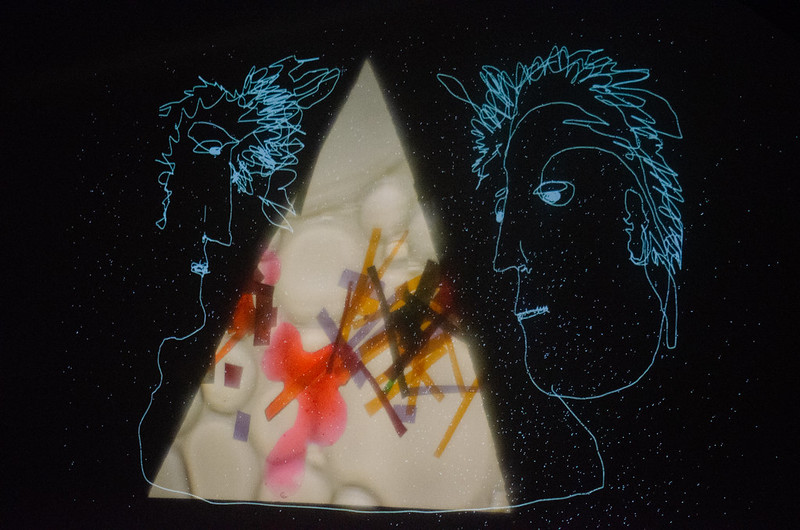 Once a month, Yannis Anastasakis (guitar, FX’s) invites musicians and visual artists at KET to create together an in situ, audiovisual project.

In the third “Sound of Color” of the year, he improvises with Savina Yiannatou (voice), Dimitris Tigkas (double bass) and Natalia Manda (live visuals).

Savina Yiannatou
Savina Yiannatou began her professional career in 1979 with the broadcast of ERT’s Third Programme “Edo Lillipoupoli”. Since then she has collaborated with many great composers (M. Hadjidakis, L. Platonos, M. Gregoriou, D. Maragopoulos, V. Katsoulis, N. Mamagakis, N. Kypourgos, etc.). Her discography includes more than twenty albums and recordings. She has been a member of the Early Music Workshop and has composed music for documentaries, video-art and theatre, collaborating with S. Stagos, M. Santorinaios, A. Krali and the National Theater. She has worked with choreographer N. Zouka for the production of two dance theatre works (“Music for a while” and “Tales of the World”). For the last ten years she has been involved in free improvisation in collaboration with musicians from the fields of jazz and traditional music. With the group Primavera en Salonico, she has released the albums “Spring in Salonika”, “Songs of the Mediterranean”, “Panagies tou Kosmou” and “Terra Nostra” and she has performed in Europe, America, Australia, Morocco, Taiwan and Israel.

Dimitris Tigkas
Dimitris Tigkas was born in Patras. He studied modern double bass initially with Evgeny Bratushka at the Volos Municipal Conservatory and then with Vassilis Papavasiliou at the Greek Conservatory of Athens, from where he graduated. In the same year he also graduated from the Department of Music Studies of the University of Athens. In September 2006 he continued his musical studies in violone (historical double bass) at the Amsterdam Conservatory with Maggie Urquhart, where he graduated with Bachelor and Master degrees. Since 2010 he lives and works in Athens. He has participated in numerous concerts and performances with symphony orchestras and chamber music ensembles. He is a regular member of the early music ensembles Latinitas Nostra, Ex Silentio and Armonia Atenea, as well as of the Medea Electronique collective.

Natalia Manda
Natalia Manda was born in 1994 in Athens. She was admitted to the School of Fine Arts in the category “Talents”, where she studied during the period 2011 – 2016. Entering the School in 2011, at the age of 17, she wins the second prize in a sculpture competition in Italy titled “Study of Public Space”. She studied with professor George Lappas in the Second Sculpture Lab. She completed her studies and curated her undergraduate thesis under the supervision of Aphrodite Liti. Graduated with a Bachelors Degree of 9.5 (nine and five). She has participated in group exhibitions in Greece and abroad and made her first solo exhibition in October 2017 at the Kappatos Gallery in Athens.

Jannis Anastasakis
Jannis Anastasakis is characterized for his special approach to the guitar, as a generator of original and atmospheric sounds, as well as for his in-depth involvement with effects and live-sampling technique (he is also the designer and manufacturer of JAM pedals). His music is a blend of ambient and psychedelia that balances between melody and noise, often pushing the “allowable” boundaries. He has collaborated with great musicians such as Arve Henriksen, Christian Fennesz, Eivind Aarset, Lena Platonos, Savina Yiannatou, Thodoris Rellos, Harris Lambrakis, Floros Floridis, Haig Yazdjian etc.